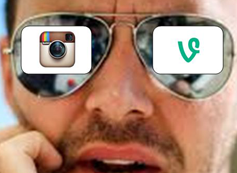 “Instagram is now completely crushing Vine” declared the headline in the July 8, 2013, edition of BGR (Boy Genius Report), the self-proclaimed world’s biggest mobile news destination. The stats to back up BGR’s assertion:

“On June 20th, Instagram debuted a video-sharing feature that comes very, very close to replicating Vine’s functionality. In less than 10 days, Vine shares on Twitter plunged to less than one-third of the mid-June level. But the most astonishing current trend is just how steeply Vine’s download volume is declining. In America, Vine has dropped from the No.3 free iPhone download in mid-June to No.16 on July 7th. Vine was the No.1 iPhone app in America as recently as June 13th.”

But Vine/Twitter vs. Instagram/Facebook means, of course, that the fight between social behemoths over short video turf has just begun.

So, popularity aside, which is better for your video sharing purposes—Vine or Instagram Video?

Vine, with 13 million users, is a mobile app owned by Twitter, which acquired Vine in Oct. 2012 and launched it in Jan. 2013. Vine enables its users to create and post auto-looping video clips that have a maximum length of six seconds. The clips can be shared or embedded on social networking services like Twitter and Facebook. Though Vine was initially available only for iOS devices, Twitter released Vine for Android on June 3, 2013, for devices with Android version 4.0 or higher.

Instagram, with 130 million users, is an online photo (and now video) sharing and social networking service launched in October 2010. On April 12, 2012, Facebook acquired Instagram for approximately $1 billion in cash and stock.

Until the June debut of 15-second video capabilities, Instagram solely enabled its users to take pictures to which they could apply digital filters to fix lighting issues or just sweeten the look of shots. Users can share Instagram images on a variety of social networking services such as Facebook, Twitter, Tumblr and Flickr. A distinctive Instagram feature is that it confines photos to a square shape, similar to Kodak Instamatic and Polaroid images (in contrast to the 16:9 aspect ratio now typically used by mobile device cameras).

Instagram Video, which allows the use of digital filters on videos, enables users to focus on specific spots while recording. It has useful editing tools like allowing users to backtrack and delete clips they don’t like. Plus, Instagram users can set a specific frame from the video to use as the thumbnail, whereas Vine defaults to the first frame of a video as a thumbnail.

While Instagram is limited to “likes,” Vine users can “re-Vine” their favorite Vine videos, sort of like a retweet, which shares them with followers.

Simply Measured, which has studied the way brands use Instagram, has noted that Instagram videos are seeing significantly higher (over 2X) engagement than Instagram photos, suggesting brands should focus more time and energy on videos instead of photos.

Whereas Instagram’s user base is (according to one critic) mostly made up of “people documenting their feet, coffees, and pets,” Vine has attracted a group of users who are intrigued by the challenges set forth in the app.

Neither of these short video apps allows the use of an existing video taken on a phone…which is possible to do with a photo. And you actually have to open the app and create the video within the app.

I think the one that makes this technology happen will dominate the market.

Let us know what you think of the Instagram Video vs. Vine conundrum.