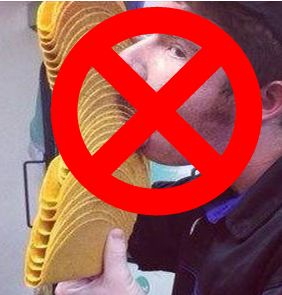 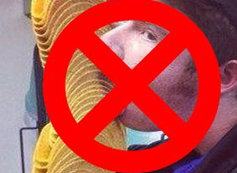 The lick seen ’round the world.

The Go Be Social Media team thought we’d share a teaching moment about the need for a social media policy for employees. Such a moment arrived for the Taco Bell fast-food restaurant chain the minute the tongue of an employee hit the taco, followed quickly thereafter by a co-worker taking a picture of the deed.

First, the facts. In early June, a photo began circulating online that showed, according to a June 3, 2003, Taco Bell press release, “a Taco Bell restaurant team member violating our food handling procedures with a stack of taco shells.”

Translation: dude was caught laying a slobbery, wet and unhygienic lick on the shells.

As Taco Bell explained: “The taco shells were used for training in March before we launched a new product, and were in the process of being thrown out. Two employees, however, used them to take a photo for an internal contest in which company and franchise employees could submit for approval photos of themselves enjoying their first bite of the product. The contest had clear guidelines about what was acceptable and unacceptable. This image was clearly unacceptable – it violated the rules and spirit of the contest, and the employees never submitted it. But an employee posted it on a personal social media page in violation of the franchisee’s policies, and it emerged online in social media.”

According to Taco Bell, the company investigated the incident, identified and fired the perp, determined that the offended/offending taco shells were throwaway items and so were never consumed by customers, and issued an apology.

Final corporate words: “As we complete our investigation we will work with our franchisee to implement any additional action we find appropriate to address this situation and ensure it never happens again.”

Google searches show that most of the negative online commentary was confined to the June 3-6 time frame. Taco Bell’s Facebook page shows an empty space for those dates:

Taco Bell has gone silent on the shell-licking subject and the Web blogosphere has apparently moved on to other crises. What’s the takeaway?

The behavior of the young man who was photographed licking the taco shells was unfortunately jejune (irresponsible, immature and childish) and did justify his immediate termination from his job.

But the behavior of his co-worker who took the picture and then posted it on the Web is also a matter of corporate concern.

Had a policy about posting company-related information – including photographs – online been in place at the time, the photographer/poster might have thought twice about how the potential results of his actions could affect his own job security.

A Social Media Policy can be a long and detailed document, but the heart of any sound policy for employees is this:

Your Company recognizes the importance of the Internet in shaping public thinking about your company and our current and potential products, employees, partners, and customers. Your company also recognizes the importance of our employees joining in and helping shape industry conversation and direction through blogging and interaction in social media. So, your company is committed to supporting your right to interact knowledgeably and socially in the blogosphere and on the Internet through blogging and interaction in social media.

However, recognize that you are legally liable for anything you write or present online. Employees can be disciplined by the company for commentary, content, or images that are defamatory, pornographic, proprietary, harassing, libelous, or that can create a hostile work environment. You can also be sued by company employees, competitors, and any individual or company that views your commentary, content, or images as defamatory, pornographic, proprietary, harassing, libelous or creating a hostile work environment.

Had the photographer thought about the legal ramifications of posting the pic of the lick, that JPEG file just might have remained on his cell phone.

Let the GBSM team help you formulate a Social Media Policy for your employees that just might spare everyone some awful, unplanned future moments.

Personally, I love whoever manages the @tacobell Twitter account. Typically that person has witty, great comebacks and I just wish we could’ve gotten that person’s response instead of the corporate public relations response, which I’m sure they were told to do. All in all, I’m sure the general public will remember “Yo Quiero Taco Bell” more than they do “Taco Boy Licking the Taco Shells.”