The Truth About: Cyberbullying

Go Be Social Media / Uncategorized  / The Truth About: Cyberbullying 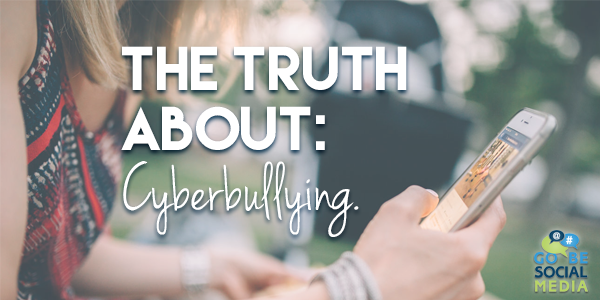 The Truth About: Cyberbullying 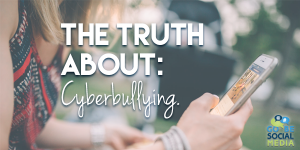 There’s a dark side to social media that touches half of today’s teenagers:  bullying.  It’s shocking to know that 25% of teens have reported that they have been exposed to repeat bullied through an online platform or cell phone , and over 50% report that they’ve experienced online bullying (source: https://nobullying.com).  When facing these kind of numbers we should all be concerned with how to change this behavior and how to protect and arm our children against it.

Bullying is an issue that’s always existed – the dark side of social media is that it’s not only easy to anonymously harass someone there’s easily a culture of sheep dog creating a herd.  The bully can start one to one and in no time become a group targeting a single individual.  When allowing your child to access social media the issues of being targeted by bullying, as well as playing the role of a bully, should be discussed.  All too often young people see bullying as harmless, not a big deal, and that someone should just simply “get over it”. However the scars from bullying cut deeper online when there’s no place to hide or escape the harassment, and all too often people are taking extreme measures to cope with bullying.

In 2015 many bullies can be held legally liable if the target of their harassment takes his or her own life.  This once seemingly harmless act that was a rite of passage is a serious issue, and rightly so.  On average one young person will take their life every two hours or less (source: https://www.meganmeierfoundation.org).  And while we can’t immediately assume that these suicides are due to online bullying, the increase in online harassment is so prevalent that it becomes too overwhelming for some people to escape. Suicide is the leading cause of death for people 15-24 years old less (source: https://www.meganmeierfoundation.org) – and when you consider that 49% of internet users are 18-29 years old (source: https://www.pewinternet.org)  we can’t deny that there’s a lot of influence coming from the internet for these age groups.

These cases of lives lost are real – and it’s important to translate the severity of what bullying can do with your child before giving them access to social networks.

In 2012 16-year-old Jessica Laney, was bullied on Ask.fm about her weight until she eventually took her own life(source: https://www.abcactionnews.com/news/region-pasco/hudson/friends-say-online-bullying-led-to-16-year-old-jessica-laneys-suicide-officials-investigating).  Harassment through Ask.fm is common, as users can leave comments urging someone to kill themselves or make disparaging remarks without leaving any identifying information behind.

The truth is that suicides rooting from social media aren’t always directly relating to bullying.

In 2014 University of Pennsylvania student, Madison Holleran, took her own life. Suicide can’t always be seen as a clear result of something, but Madison had been giving signs that she was struggling with living a life that she thought measured up to what should have been.  She believed that the way she saw her peers experiencing college through the filters and poses of Instagram was how she was supposed to be experiencing it.  Madison was on the track team, attended parties, had a roommate she was close with; but she struggled with being content with what she had in comparison to what she perceived the experiences of her peers to be thanks to social media.  (source: https://espn.go.com/espn/feature/story/_/id/12833146/instagram-account-university-pennsylvania-runner-showed-only-part-story).  This comparison and perception of reality can be overwhelming for teens and young adults.

Cyber bullying is a real issue that can have life altering consequences.  Kids, teens, and young adults are finding it more difficult to cope with harassment online.  Currently it’s estimated that 3 million kids miss school every month due to bullying they deal with online.  On top of that 20% of kids who are cyber bullied consider suicide, of those 1 in 10 actually attempt it (Source: https://www.cyberbullyhotline.com/) .

This is a problem that is the responsibility of all of us to change.  If you suspect your child is playing the role of an online bully it becomes necessary to dig in and find out what is going on.  If you feel as though your child is being bullied online talk to them about what they have experienced, even giving them the option to report the bullying through other channels.  Being involved, aware, and open to conversations with your child can change the landscape of cyber bullying.  They say it takes a village to raise a child, but it also takes a village to change the landscape of a society-wide epidemic.